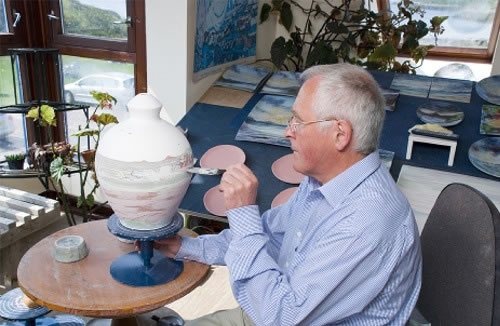 David Grant, M.B.E., M.A., (RCA), born at Achfary in the Highlands returned to his native heath to establish Highland Stoneware at Lochinver in 1975. Since then he has been not only MD, but designer, decorator, potter, chemist, engineer, salesman, educator, visionary, and a friend to all his staff.

David has been responsible for modelling all the jigger and jolley forms along with Grahame Clark and David Queensberry. David has also worked on the development of extruded forms along with former employees Ruth and Euan and now with Andrew.

He also made input to the then thrown forms although the considerable skills of Fergus Stewart and Paul Gow require little comment.

David has been involved with a lot of decoration development including landscape and seascape from the outset also Sheep, Rockpool and all the watery variations. He regularly does ‘one off’ or special pieces and has painted many of the tile panel commissions.  Most recently he has been passionately researching and developing our work on glazes made from local materials, including Ullapool limestone, Ledmore quartz, Lewisian gneiss and Stoer beach sand.

It might be argued that David gains a lot of his inspirations from his angling excursions on the local lochs and rivers. He is an active member of the Assynt Angling Club.