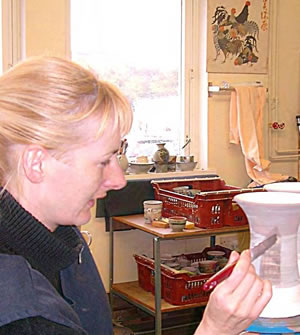 Dawn Healey began working for Highland Stoneware in 1999 with the making team where she specialised in making and finishing extruded items such as the fish dishes, ashets and lasagne dishes.

Since then, Dawn has moved to a permanent position in the decorating department, where her precision and attention to detail have been hugely beneficial. She has been particularly influential in her contribution to the landscape pattern, but has also decorated many beautiful wild and domestic animals. In addition, Dawn has taken on the responsibility of firing the glost kiln.

The ‘Ring of Brodgar’ pattern, based on the standing stones found in Orkney, was developed by Dawn in both a day and night colourway.